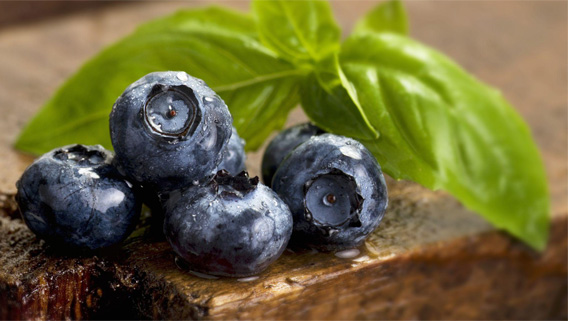 In the popular press, blueberries have reached superstar status in terms of their unique health benefits. While we prefer to think of all the World's Healthiest Foods as rightful superstars, we can understand many of the special accolades being given to this wonderful berry. Most health research on blueberries involves their phytonutrient content. Anthocyanins - the colorful antioxidant pigments that give many foods their wonderful shades of blue, purple, and red - are usually the first phytonutrients to be mentioned in descriptions of blueberries and their amazing health-supportive properties. While it is true anthocyanins are pretty spectacular when it comes to blueberries and their support of our body systems, there are actually a wide variety of health support phytonutrients found in blueberries. Here is list that spotlights some of the better studied of these blueberry phytonutrients:

Virtually all of the above-named phytonutrients function both as antioxidants and as anti-inflammatory compounds in the body, and they are responsible for many of the well-documented health benefits we get from regular consumption of blueberries.

Given the wide variety of antioxidant nutrients present in blueberries, it is not surprising to find research studies showing improved antioxidant defenses in body systems that need special protection from oxidative stress, like the cardiovascular system. But what is surprising about the blueberry research is its whole body relevance. It is not only the cardiovascular system that has been shown to have strengthened antioxidant status following consumption of blueberries. It is virtually every body system studied to date! For example, there is new evidence that damage to muscles following overly taxing exercise can be reduced through consumption of blueberries. There is also evidence that protection of the nervous system from oxidative stress can be accomplished by regular consumption of blueberries. These antioxidant-based protective effects have been shown in older adults at risk of neurodegenerative diseases, as well as in younger healthy adults and middle-aged obese adults. Antioxidant protection of the blood sugar regulatory system has also been demonstrated in blueberry intake studies, as has antioxidant protection of the digestive tract (especially with respect to the colon and its risk of cancer). It's this whole body antioxidant support that helps blueberries stand out as an amazing antioxidant fruit.

Blueberry support of antioxidant defenses has been especially well documented with respect to the cardiovascular system. It's the many different pathways for cardio support that are so striking in the blueberry research. In repeated studies of blood composition, blueberry intake (usually in the amount of 1-2 cups per day and over the course of 1-3 months) has been shown to improve blood fat balances, including reduction in total cholesterol, raising of HDL cholesterol, and lowering of triglycerides. At the same time, blueberry intake has been shown to help protect the blood components (like LDL cholesterol) from oxygen damage that could lead to eventual clogging of the blood vessels. Protection has also been shown for the cells lining the blood vessel walls. Connected with this antioxidant protection of blood vessel structures and blood fats is an improved overall antioxidant capacity in the blood itself. Interestingly, the ability of blueberries to increase plasma antioxidant capacity seems to continue as blueberry intake goes up above everyday levels. For example, some studies have shown better total antioxidant capacity when 3 or more cups of blueberries were consumed per day as compared to a daily intake of 1-2 cups.

Recent research has added yet another factor to our understanding of blueberries and cardioprotection. That factor involves an enzyme called nitric oxide synthase (NOS). Most studies on NOS have focused on a form of NOS called inducible NOS, or iNOS. Excess formation of iNOS is

generally associated with increased risk of inflammation. However, there is a second form of NOS called endogenous NOS, or eNOS. Increased activity of eNOS is usually associated with better balance in cardiovascular function. Recent studies have shown that daily blueberry intake can result in increased eNOS activity, and this result is viewed as helping to explain some of the unique health benefits of blueberries for the cardiovascular system.

One of the most exciting new areas of research on blueberries is the area of cognitive benefits. In one study involving older adults (with an average age of 76 years), 12 weeks of daily blueberry consumption was enough to improve scores on two different tests of cognitive function including memory. While participants in the study consumed blueberries in the form of juice, three-quarters of a pound of blueberries were used to make each cup of juice. As participants consumed between 2 and 2-1/2 cups per day, they actually received a very plentiful amount of berries. The authors of this study were encouraged by the results and suggested that blueberries might turn out to be beneficial not only for improvement of memory, but for slowing down or postponing the onset of other cognitive problems frequently associated with aging.

Lab and animal research studies on blueberry intake suggest that a large part of this cognitive protection is most likely due to nerve cell protection from oxygen damage by blueberries' vast array of antioxidant nutrients. Nerve cells have a naturally high risk of oxygen damage and they require special antioxidant protection at all times in life. Their ability to send information throughout the body depends on the presence of balanced oxygen metabolism, and that balance cannot be achieved without ample intake of antioxidant nutrients. By lowering the risk of oxidative stress in our nerve cells, blueberries help us maintain smoothly working nerve cells and healthy cognitive function.

difficult for these individuals to keep their blood sugar levels from spiking too high (or sometimes also from dropping down too low). Research on blood sugar balance and blueberry intake has been conducted on individuals who have been diagnosed with type 2 diabetes, metabolic syndrome, or insulin resistance, and the results of this research have been consistent. They have shown that blueberries (along with other berries) have a favorable impact on blood sugar regulation in persons already diagnosed with blood sugar problems.

When compared to other berries, blueberries are not particularly low in terms of their glycemic index (GI) value. Studies show the GI for blueberries falling somewhere in the range of 40-53, with berries like blackberries, raspberries, and strawberries repeatedly scoring closer to 30 than to 40. However, recent studies have shown that blueberries definitely function as a low-GI fruit in terms of their blood sugar impact. In one study on individuals diagnosed with type 2 diabetes, study participants who consumed at last 3 servings of low-GI fruits per day (including blueberries) saw significant improvement in their regulation of blood sugar over a three-month period of time. Their blood levels of glycosylated hmmoglobin, or HgA1C were used as the standard of measurement in this study.

The blood sugar benefits of blueberries should not be surprising. Even at 40-53 in terms of glycemic index, blueberries typically fall into the "low-GI" category of foods (usually defined as any food with a GI of 50 or below). They also provide a very good amount of fiber (nearly 4 grams per cup). Most low-GI foods with strong fiber content are foods we can count on to be helpful in blood sugar regulation.

The retina of the eye is a unique place in our body and it is also a place that is at higher than normal risk of oxidative stress. Foods unique in phytonutrient antioxidants are often investigated for their ability to help protect the retina from oxygen damage, and blueberries are no exception! In preliminary studies on laboratory animals, the anthocyanins in blueberry protected the retina from unwanted oxygen damage. Interestingly, they have also been determined to help protect the retina from damage from sunlight. Like the area of cancer protection, we look forward to future research on human eye health and the potential for blueberry intake to help protect the human eye from damage by sunlight and oxidative stress.

While almost exclusively coming in the form of laboratory studies on human cells or laboratory animal studies, an increasing percentage of the blueberry research is being focused on anti-cancer benefits. Types of cancer already studied with respect to blueberry intake include breast cancer, colon cancer, esophageal cancer, and cancers of the small intestine. We look forward to the results of large-scale human studies on the potential ability of blueberry intake to lower risk of these cancer types.